Curied Cell Culture of Paris: The Street Memeology of Oui

Went to Paris this past Columbus Day weekend. On Air India, overnight flight, arrived in the morning in delirium, got the train into the cité. The rest of the plane continued onto Mumbai (formerly known as Bombay). 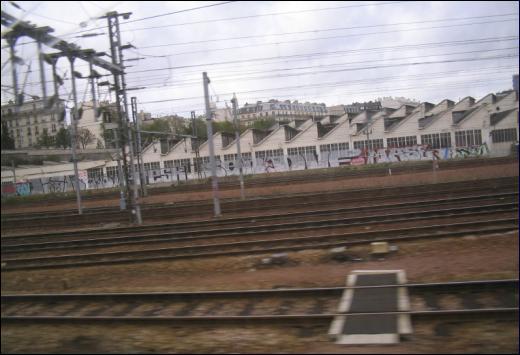 on the train to the seine

Checked into our hotel near the Bibliothèque National, not the most nuclear location, but considering it was the tail end of fashion week we were lucky to have a cube of space to call home, a fairly spacious and quiet one at that, compared to other PariSeine accommodations. 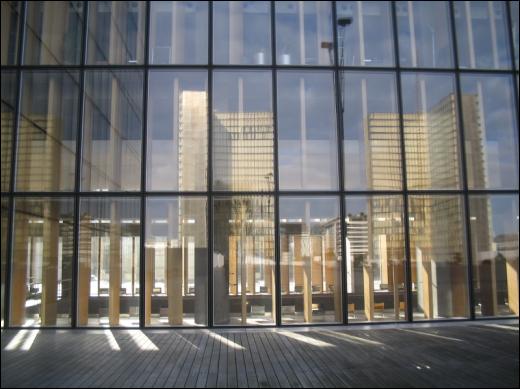 The Bibliothèque National is a fairly new and stark-angular complex of buildings built by Mitterand that sits on the Seine southeast of the city center. Evidently, there is a lot of information stored there. 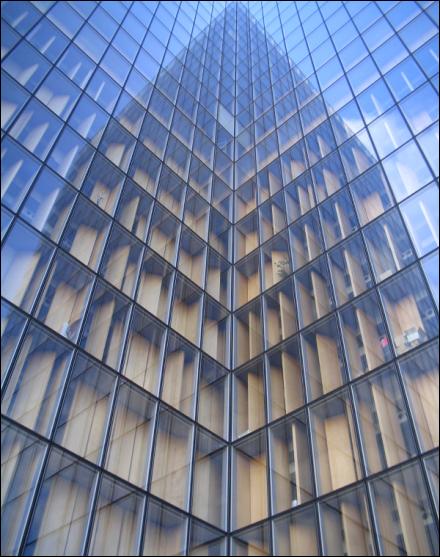 Maybe it was because this was during my time off before starting my next job as an "information architect," (the first time this title has officially been bestowed upon me) or maybe because that's just how my mind works, but in our wanderings and exploration of the street-level architecture of Paris, I found myself thinking a lot about the cultural dissemination of information, or memes, and how Paris got to be the way it is. 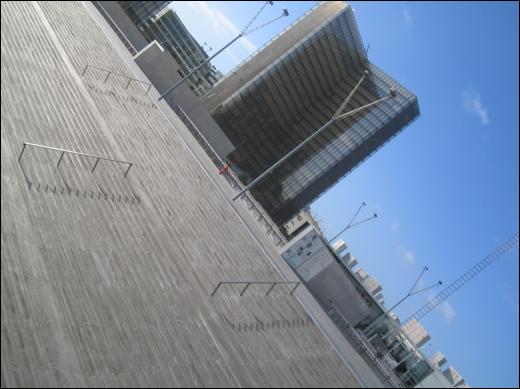 Paris is a living cell. Though, in trying to find maps of Paris to illustrate it's cellular nature, all I found were blogs dedicated to the contents of Paris Hilton's lost cell phone--the meme current apparently simmering at the top of the pop-culture meme pool. Trust me, Paris is not skinny, it's cell-shaped with a river running through it and rotund radial arteries of roads and metro lines (though I guess, really, Paris is the son of the King of Troy, suitor of Helen, etc.). It's always hard to tell what the city is shaped like when you're within the city. Like a fractal each block, each establishment, each occupant, comprises and also contains information about the whole. 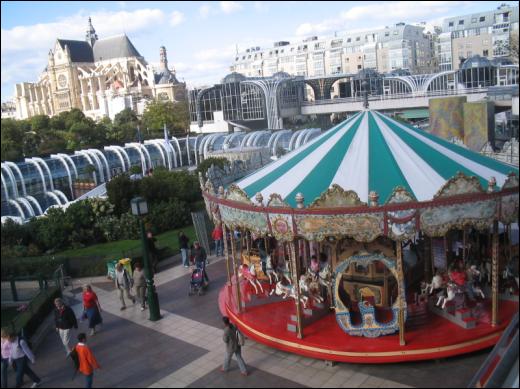 We wandered for three days and nights, though I can't remember where we went on what days. We weren't exactly systematic about it, and doubled over our footsteps frequently. When we got tired, we'd hop on the metro for a few stops, or for a boat ride on the Seine. 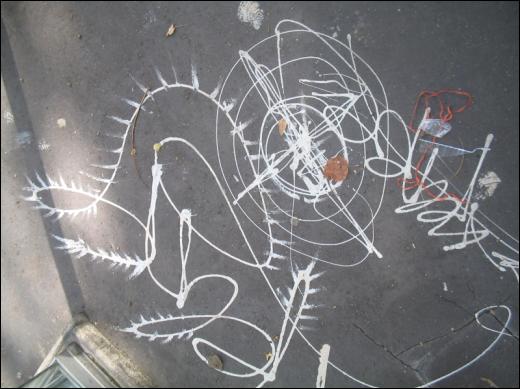 We hit all the obvious landmarks that are well documented elsewhere. 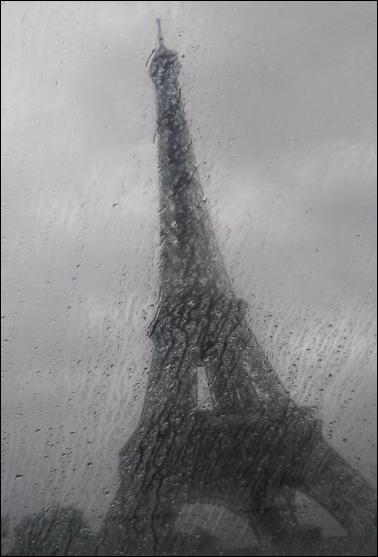 Yes, it rained the first day, or evening, but that didn't hinder us too much, though perhaps it deterred us from finding the ultimately stinky fondue restaurant I remember eating at ten years ago (L’Etoile du Berger, I realize now, looking through my old journal). Instead, we took shelter in Le Coupe-Chou the first night, looking like drowned rats feasting on escargot and wine.

Somewhere in the first day, we also came across the Paris Mosque, which had some stunning architectural elements (with the recursion of the cellular motif). 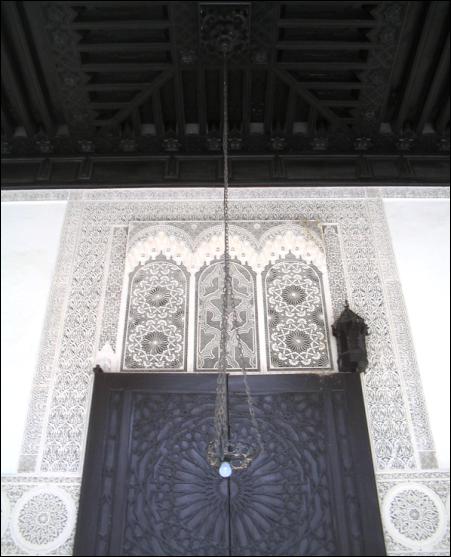 And of course we hit up Notre Dame, though pictures don't do that justice. I remember when I was taking a physics class, the professor used the Notre Dame as a metaphor for what an atom looked like (especially in regards to all the space in the probability orbitals) and that image has always stuck in my head (even before I ever came to the Notre Dame). 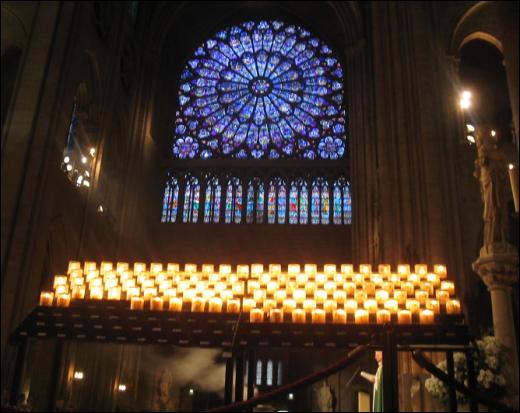 As for street memeology, Paris is a bit weak. The streets are for the most part manicured and clean, at least compared to the grittier New York. What little graffiti they have is usually the typical bubbly letters or tags, nothing too innovative or creative. At least not in the districts we passed through. There were a few interesting stencils, most notably by a "Miss.Tic" though they seemed fairly polished and calculated, dare I say they reminded me of Nagel prints, like advertisements (in fact, one we saw was advertising a show of hers). Her thing was generally sexy women and cats. 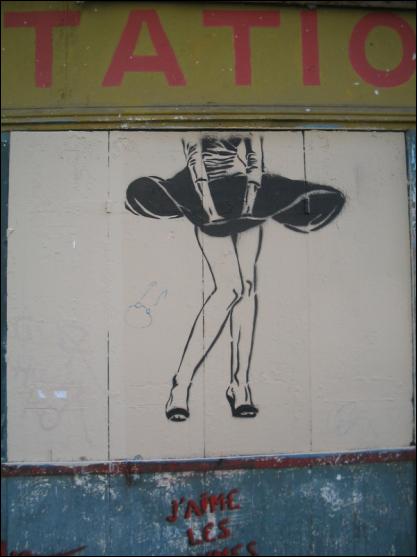 These ones we saw seemed concentrated south of St-Germain-des-Prés. 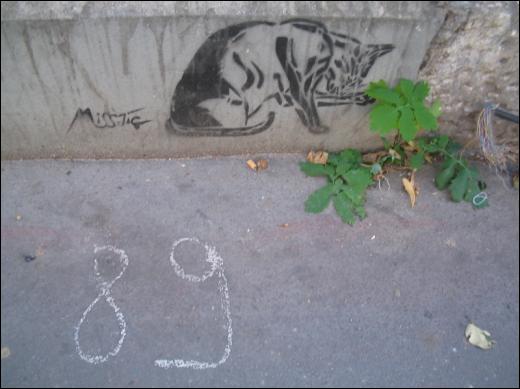 Okay, I couldn't help myself, one more. 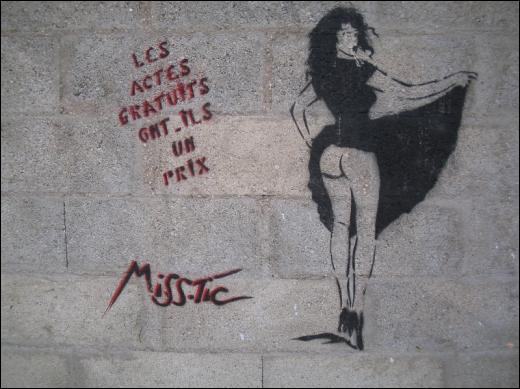 My French sucks, but I think it says, "Free acts come at a price." Maybe some sort of sexual variation of "freedom's not free".

Jess spotted another one, by a Chantier Vivant Keffer, most notable for it's fine integration with the nearby font. 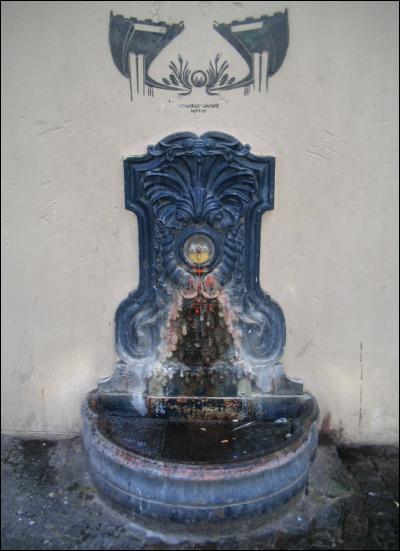 In looking at some of Keffer's pics on Flickr, I noticed he had the decency and good sense to tag a Starbucks, (atta boy!), which unfortunately seem to have proliferated in Paris, apparently unchecked (the establishment, not the meme).

We also noticed quite a few people oinking out on McDonalds, though the Parisians still remain miraculously skinny. We debated this to death, while we oinked out ourselves on fondue or frites--my observation is that it's not so much what you eat, but how you eat it. The French take for fucking ever to eat a meal. Oh, and that business about the French being rude is a load of crap. They might respond rudely if you are rude, just like New Yorkers or any other reasonable person. 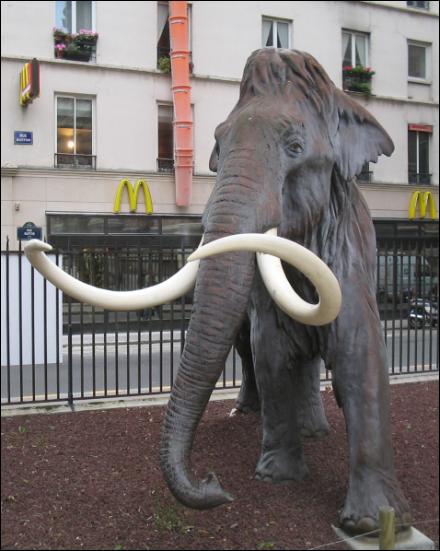 The fonts of Paris are très chic, Jess took more specific examples of cool signs and creative font usage, but pretty much the second we got back to New York, she turned around and went to Seattle so she hasn't posted her pics yet. But I suppose everybody has to take a picture of at least one Metropolitan sign, mine avec Le Moulin Rouge (note the ungodly neon Coca-Cola next to it!). 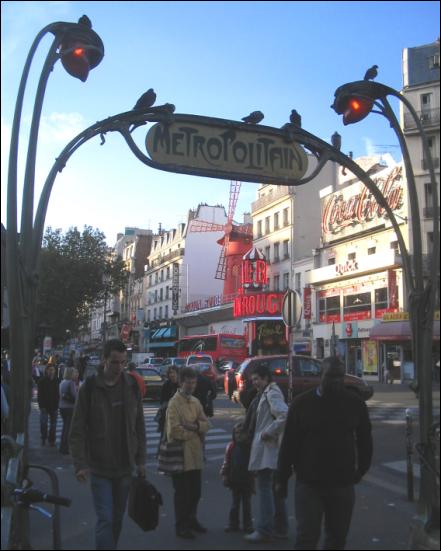 Oh yah, we ventured up into the Montmartre district above Moulin Rouge, where a few "real" windmills and vineyards remain. As our luck (good or bad) would have it, the hilltop around Sacré-Coeur was jam-packed with people for some sort of wine festival. It was bedlam. Sometimes it's depressing being around so many people, like there's nothing left undiscovered.

Fuck people, back to distressed signage... 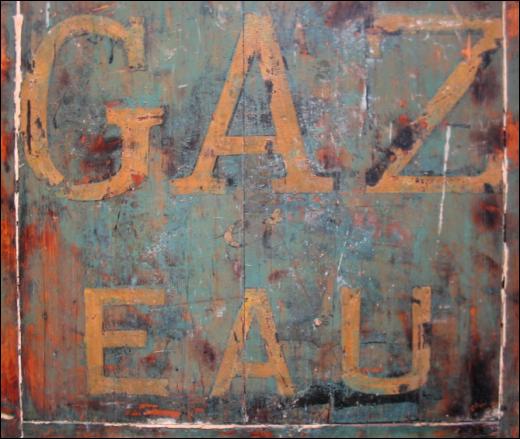 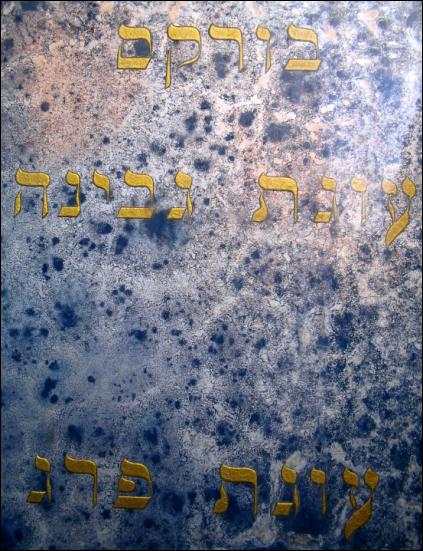 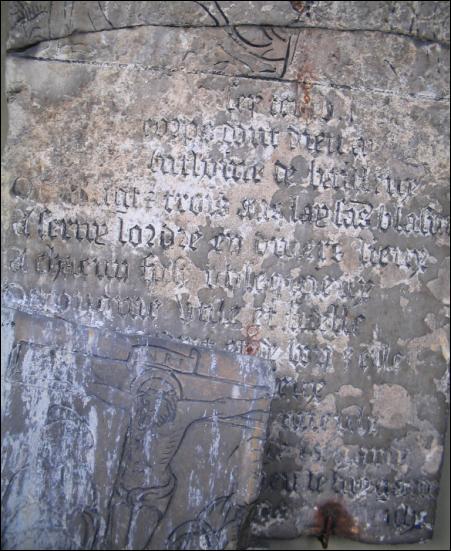 detail from slab in Musée Carnavalet

The street musicians of Paris were fairly decent, especially on the Metro or on the banks of the Seine on Saturday night. Though it is baffling-- much as they seem to enjoy music and playing it on the streets, the French seem to worship American or British music as if they don't have music of their own. Dylan or Bowie or Tracy Chapman. Maybe something about the French language doesn't lend itself to being sung. Even instrumentally, it was usually jazz or blues. There are exceptions of course--maybe we have the French to thank for the influence of the accordion?

Interesting, now when I google "why don't the French rock out?" the first choice is David Bryne's fine blog. He doesn't answer this question, but does give insight into the future of small labels, or whether you need record companies at all, insight that perhaps could also be applied to small presses. And then he goes on to talk about the importance of randomized expression in music. Every time I happen on his blog I get sucked in. 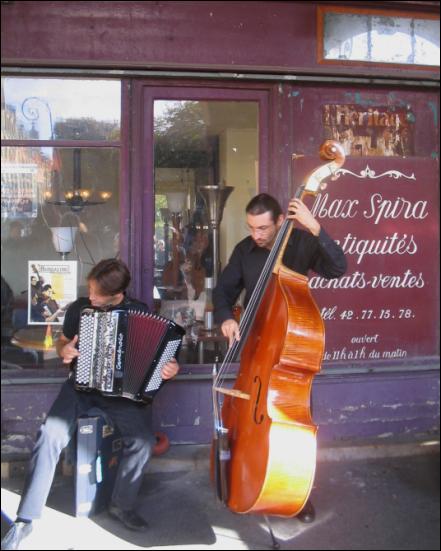 Staying on the topic of memes and death, we also made it out to the Montparnasse cemetery. We found the tombstones of the likes of Samuel Beckett, Susan Sontag and Serge Gainsbourg (okay, another exception to the above generalization), though for the life of me I couldn't find César Vallejo's grave. James Wagner captured a shot of that at the end of his Trilce. 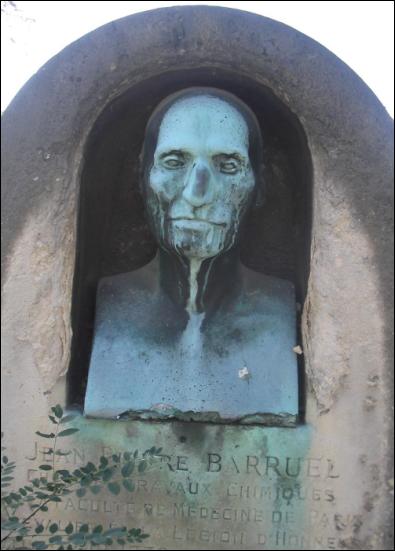 And we wondered as we wandered... 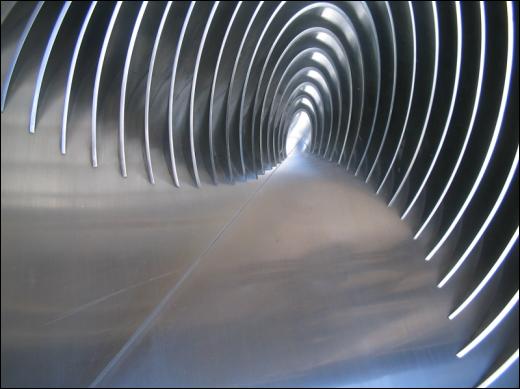 sculpture in garden of Musée Carnavalet

... on tangents, about the influence of the arch on French sculpture, or the popularity of inline skating in Paris... 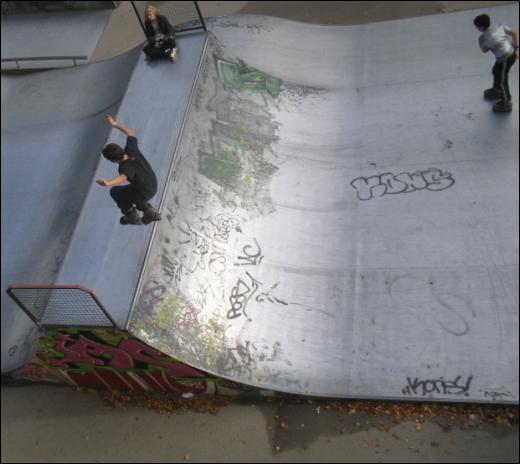 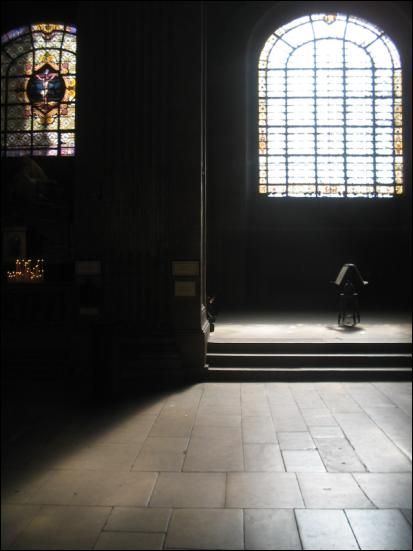 interior of some church, I think near Pompidou center

... or about function over form. 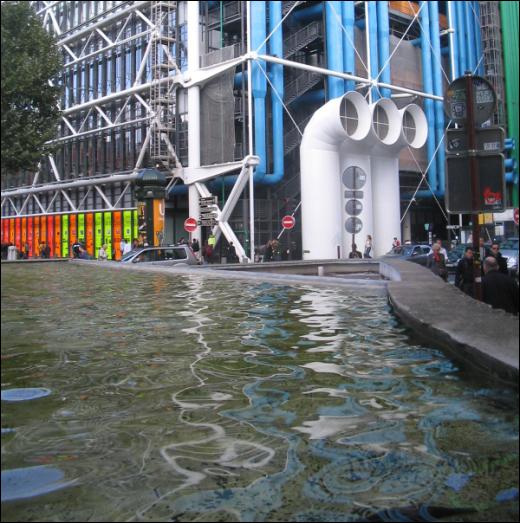 fountain reflecting the guttural "inside out" façade of the Pompidou

New meets old, builds on top of it, in the ruins, or the new is the ruin of the old. One is silver and the other gold. 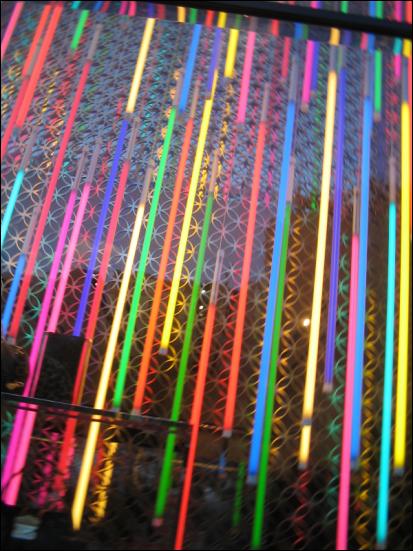 After passing by La Sorbonne, where my hero (forget about Joan of Arc) Marie Curie  taught, we waited to go into the Panthéon, where she was re-buried in 1995. 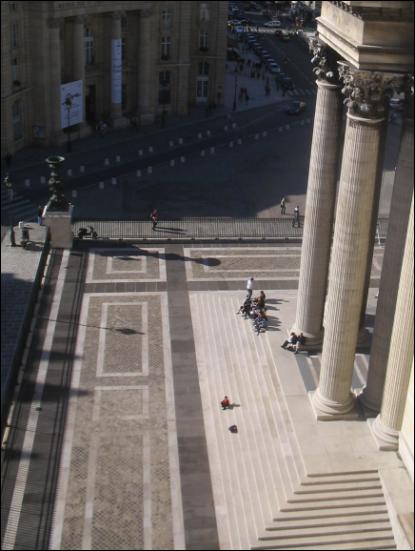 Panthéon as seen from its own roof

No longer liturgical, it now serves as burial place for more secular French heroes. It also still houses the infamous Foucault pendulum. The inside was swagged out in a fantastic installation by Brazilian artist Ernesto Neto, essentially a bunch of white pantyhose filled with sand hanging from the ceiling. Very biological and cellular, in-seine in the membrane. 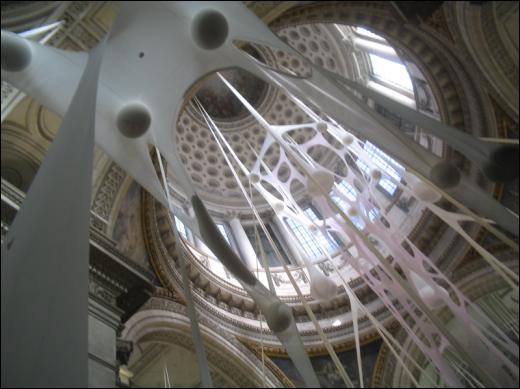 We were also fortunate to serendipitously visit Paris during Nuit Blanche, or "white night"--an annual all-night cultural festival celebrating art and light. Not that we planned it that way. There were art installations and performances all over the place, and throngs of people queued up to see everything, though half the time I'm not sure what we were looking for or at. Mostly, I think it was an excuse for a big party. 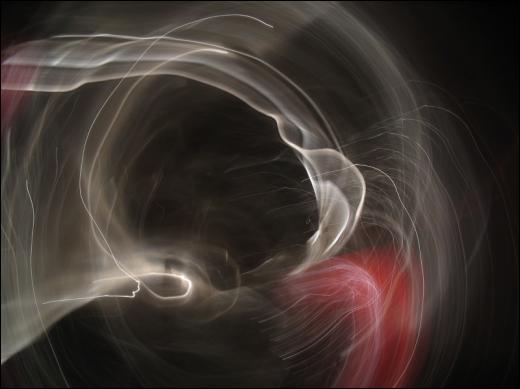 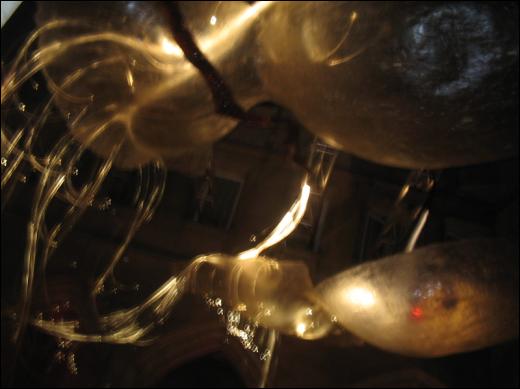 What makes up a city after all? Is it the geography, the architecture, or the accumulation of people's souls that built and lived in it? The physical remnants and relics of the politicians, artists, architects, laborers, philosophers, cooks, thieves, lovers, scientists, etc.? The amalgamation of memes pooled into one entity comprised of many ever-evolving and ever-lasting sensory-bytes for future generations to experience? Will cities exist after man is gone from them? And what did Ali mean, when delivering, on demand, the world's shortest meme/poem, did he mean: 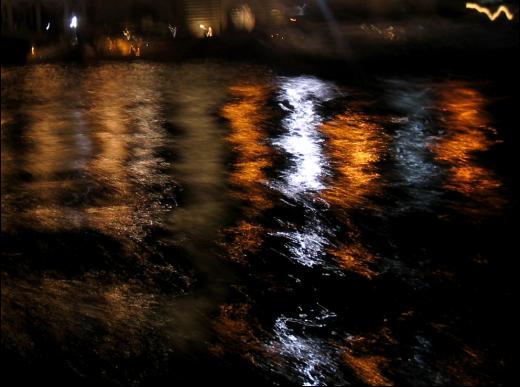 the City of Lights reflecting on the Seine