The Night I Dropped Olson on the Cat: Covering John Olson

John Olson shoots from the hip. He is not really a hippy, nor a hipster. He is not a cowboy either, though he is fond of jerky. He is fond of a lot of words. John Olson is unbridled. You could call him an outalw. He is a straight-shooter that peppers his targets. His bullets are words. He chooses them well. He loads their shells with lead so they carry weight. Olson shoots these words into space. What kind of space? To quote Olson himself:

“The space in which I believed there to be a cat and there was no cat was that delicious space we call fiction. As when a word doubles for something not actually present.”

John Olson is free. John Olson lives on the Puget Sound. I only mention that because I like the name of it, the way it sounds, pugety. Why am I going on about John Olson? I was recently asked to do the cover for his next book, Backscatter that Black Widow Press is putting it out. I had the pleasure of reading it of course so I could do the cover. It has some pieces from The Night I Dropped Shakespeare on the Cat, which I had the pleasure of publishing. It also has select pieces from his other books, Oxbow Kazoo, Free Stream Velocity and Echo Regime. I'm sure I'm forgetting others, he is prolific. And there are plenty of new pieces too. I guess you could think of it as a greatest hits double album with new material, like Rattle & Hum. But better. So if you haven’t checked out Olson, now’s your chance.

Doing a cover for a book is in a sense a review. Covers are designed to say buy me. Or at least open me. They are the superficial glossing of what to expect inside, all those words compressed into a 6" x 9" image, if such a thing is possible. It is not an easy thing to sum up John Olson on a 2-dimensional page. He does not take to being corralled. He has a knack for being all over the place at the same time. He is so wrapped up in words, the stories they weave are incidental epiphanies. Here’s a blurb by Rebecca Spears that encapsulates Olson well, from a review that just appeared in Sentence 5:

"To be sure, Olson's poetry works the reader, wakes up the mind, and makes one wonder that someone first named an object or action, that someone once sculpted those "bits of air called words." And if, centuries ago, a person gave name to a thing, then why not the poet now? Why not pry word from the meaning or give expression to something seemingly nonsensical that may after all make sense? This is what poets do in the realm of art."

Olson does not always get such “good” reviews. He has been known to get “bad” reviews. He gets some people by their goats. Like me, Olson cares more about the etymology of “get your goat” than he does about such reviews. Or their choice in words. Anyhow. Backscatter is the name of this new book. To quote myself quoting something I heard (I can do that right?), in a piece I had recently in QAE 13, “When Rutherford discovered the true nature of the atomic nucleus, the shock of the discovery was like shooting a bullet at tissue paper and having it bounce right back at you.” That’s what I think of when I think of “backscatter.” This QAE piece, This Could All Fit in a Wadded Tissue, has nothing to do with backscattering. The sentence after this line is, “He teaches him to keep flasks of blood out of direct sunlight.” Olson’s Backscatter is also not really about backscattering. I suspect he just likes the word and it's implications. That’s the way he works. He also likes the words “bee” and “tuba”. These are things I felt needed to be on the cover. The crumpled tissue paper was more my projection. As was the inclusion of Little Jack Horner. Is anyone else old enough to remember Little Jack Horner? He was this kid who sat in a corner eating a Christmas pie. The one that stuck in his thumb and pulled out a plum and said something like, “what a good boy am I.”

I don’t want to give too much more away. There was no cat where Olson believed there to be a cat. Just like for Rutherford, there was an atomic nucleus where he believed there to be plum pudding. Olson accepts what he sees and believes what he can’t see. Like Rutherford, he is a true experimentalist. Reading Olson is like shooting a shotgun at Kleenex. Not every word bullet hits, but when they do, Eureka! Without further ado, here’s the cover that Olson's words inspired in me. 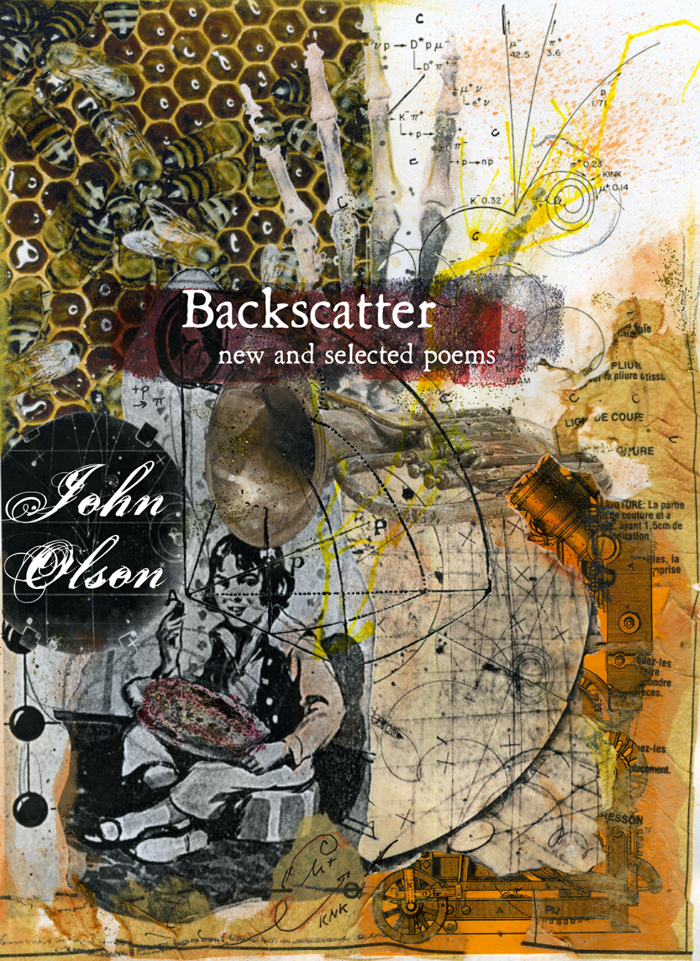 Watch out for the book, coming out soon from Black Widow Press.