The last time I was in Miami was after two months of sensory deprivation living up in the fringes of the Arctic Circle. Coming from the white and senseless expanse of the Arctic, Florida was complete sensory overload. Now we were returning to Miami with a new objective: to experience a visual poetry show curated by Carlos M. Luis at the Durban Segnini Gallery in Miami.

... but first we would have to leave the ground. We spent 2 hours sitting in an airplane at JFK going absolutely nowhere (which is a metaphysical concept to ponder in an of itself). They were trying to retrieve some part from a hangar, which they ended up not finding, so we all had to get off the plane and get on another one, and of course people were not too happy about that.

By the time we finally got to Miami, the only thing on our minds was checking into our hotel and eating (our only consolation for a day spent waiting in planes and airports was a handful of pretzels). There were a half a dozen messages on our cell when we landed about a performance that Carlos Luis and others were giving, but it started at 7 p.m. and we were just sitting down to dinner at 6. The performance ended up being at 9, but by that time we had resigned ourselves to drinking and not going anywhere except walking on the beach and around South Beach.

Our hotel (The Shelley) was packed with spring breakers so it was difficult to get any sleep. It was one big MTV beach party. The rooms across the hall had a dozen or so dolled up but trashy sorority girls packed into each one, including one girl “Moe” who proceeded to get drunk and lock herself in the room. All the sorority sisters were pounding on the door and screaming, “MOE! MOE! MOE!” over and over at 3 a.m. When they finally got smart enough to call the police to break down the door, that sobered Moe up. I guess college is about learning lessons.

The next morning we were up early to get some much-needed sun and swim in the clear Caribbean waters. Of course it felt so good that we overdid and got burnt to a crisp. We explored Miami some—I don’t know if it’s because of the Spring Break action, but it’s not the Miami I remember from 10 years ago. It was always superficial, but now it’s ridiculously so, and not even that gay or artsy anymore, and definitely not classy. The pastels have faded and the art deco architecture looks cheap and rundown, and not even in a seedy way. 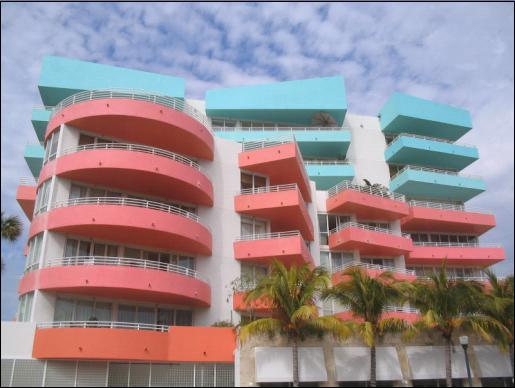 There was little graffiti, and despite the harsh climate, it doesn’t seem to weather well like the architecture in New York (or say, Savannah). And the strip malls are encroaching so it is starting to look like any other American city. 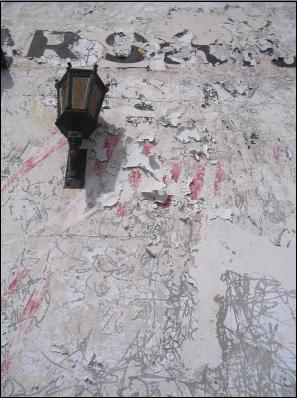 It seems that no trip we take these days is purely touristic—especially during a brutal February in NYC when our minds gravitate towards getting the hell out of a city that is getting more and more expensive and the jobs harder to come by and paying less and less—so of course we were scouting Miami out with the possibility of living there. Conclusion: nice as the weather is, we just couldn’t picture ourselves there. Lesson learned: It’s always good to get away to appreciate what you have. 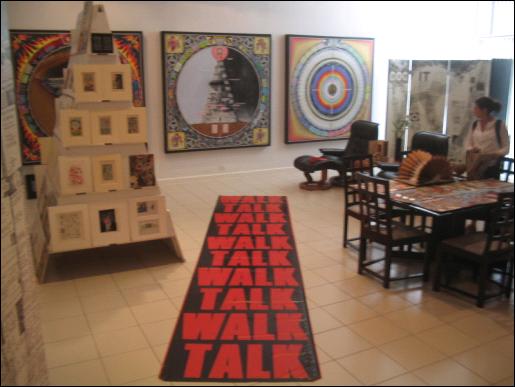 We headed in to one the smaller connecting islands (one of the islands that Christo wrapped I think?) to the house of Marvin and Ruth Sackner. The infamous Sackner archive is Mecca for any visual poet. It houses some of the most quintessential pieces and artists in the world of concrete and visual poetry. Almost everyone that was in the show was there for the tour (including Wendy Sorin, who I was meeting for the first time, as well as Michael Basinski, John M. Bennett, Scott Helmes, Sheila Murphy, Kathy Ernst, Chris Fritton, Michael Peters and others), Marvin and Ruth gave us a private tour and were gracious and accommodating hosts. 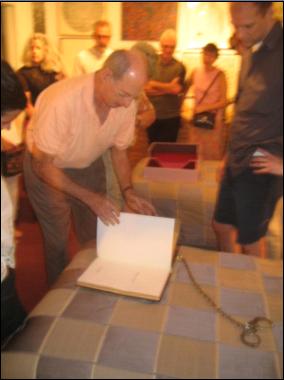 It was almost overwhelming, like looking at the covers of many enticing books, but not having the time to read them. Included in the collection are all the original pages from Tom Phillips' A Humument, which in itself made the trip worthwhile. 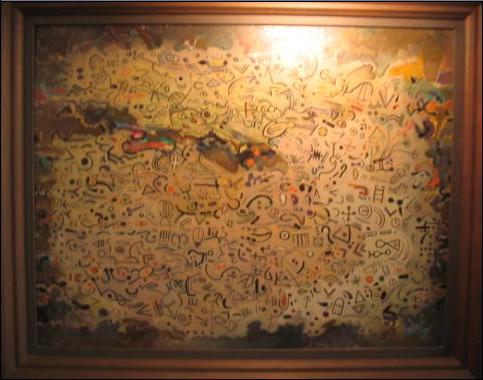 Other favorite surprises in the collection (at least on superficial inspection) included Dimitry Babenko and Simon Lewty: 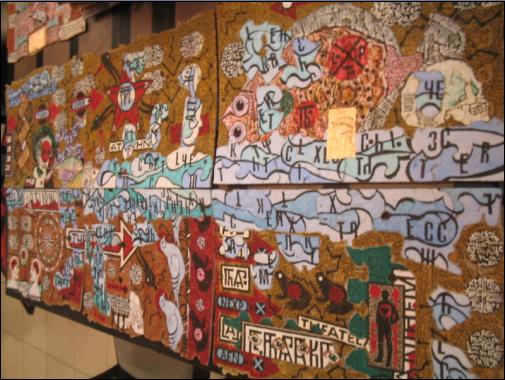 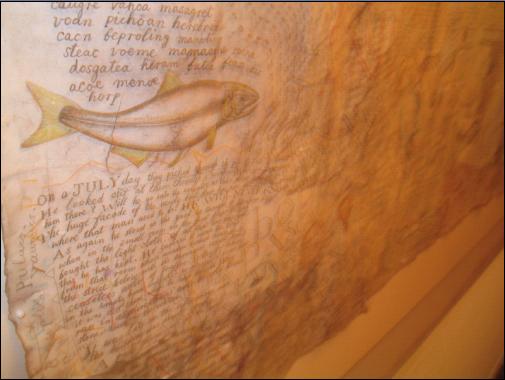 Of course you can view work from the Sackner Archive online, but seeing it in person was a whole new trip. Marvin or Ruth, if you are reading this and ever need someone to housesit for a week, you know who to call!

After the tour of the Sackner Archive, we caravanned over drawbridges and through the sterile downtown over to the gallery. 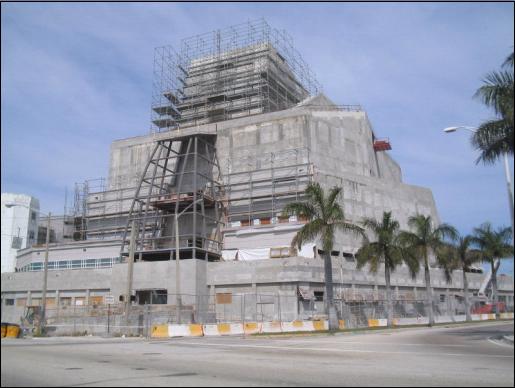 We adopted the Michaels (Michael Peters, and another Michael who's last name I didn't catch) into our rental ride—interesting cats from the University of Albany. We got to the gallery and I finally met Carlos Luis, a collaborator of mine and mastermind behind the exhibit. He was as I imagined and more. A bit scattered as you’d expect such an artist to be, but a gracious host and curator. There were many fine works represented, and nicely displayed in a spacious room. Particular favorites of mine included Petra Backonja’s pieces as well as David-Baptiste Chirot, though there was lots of other strong work and a good turnout.

More samples from the exhibition are up on on Spidertangle.

Maybe its just me, but I think the danger of “visual poetry” lies in overlooking the content. Especially when they are on display in a gallery, it is easy to give a piece a superficial glance and appreciate it at a visual level, but often the actual content is difficult to “read” or can be seemingly meaningless if you do. I think the visual nature of “poetry” or writing is an important aspect that is often overlooked, and the use of visual props and experimental configurations of text when necessary can enhance a piece, but I think I differ from most of the others in that I consider the visual nature of a writing to be just another aspect or tool in the toolbox, and not a conscious intention worthy of its own genre (then again, I detest labeling any genre). That said, there was some innovative work and artists that while perhaps not typical of visual poets, are adopted by the visual poets for lack of anywhere else to go in creative writing or the arts. 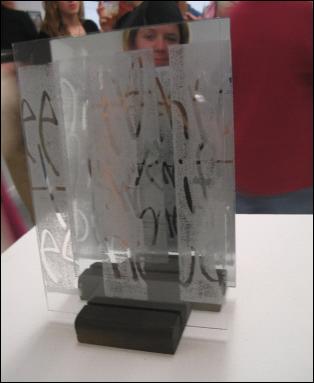 There was an impromptu, or at least seemingly spontaneous reading later on at the show, headed by Michael Basinski and then John M. Bennett. If visual poetry is difficult to “read,” it’s really hard to comprehend when spoken (for me anyway, but I have a hard time absorbing material aurally). But maybe that’s the point—it’s interesting in the sense of a musical performance, or just in the absurdity of the babble of language. Though as a rule, I typically don’t “perform” my work, I was suckered into participating in one of the group readings, though all I had to do was say the letter “P” over and over (while I took pictures of the crowd). 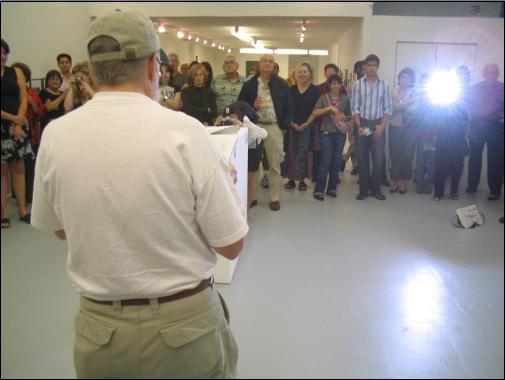 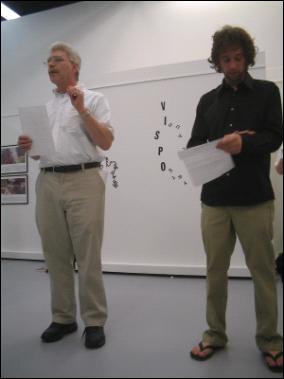 Afterwards, some of us went to Versailles, which despite the French name is evidently the most famous Cuban restaurant in Miami. The gaudy décor was straight out of Scarface. The food was good, but the company was better. Carlos told us stories of his leaving Cuba and coming to NYC and Miami, and how he become involved with the socialists and museum politics, and eventually how he gravitated towards vispo. 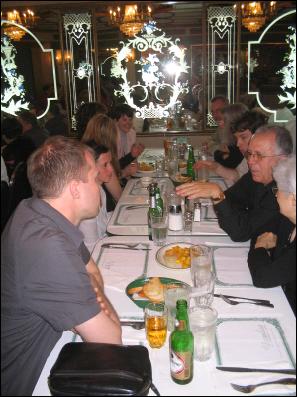 Afterwards we drove with the Michaels back to South Beach, and figured if you can’t beat the college kids you may as well join them so we went and got some drinks and people watched on the strip. Eye opening to say the least, but also a bit depressing at the priorities of contemporary American culture. We lasted one drink and went back to our room. We had moved rooms, but our new floor was full of frat boys that played Frisbee and broke lights in the halls until the early hours of the morning. 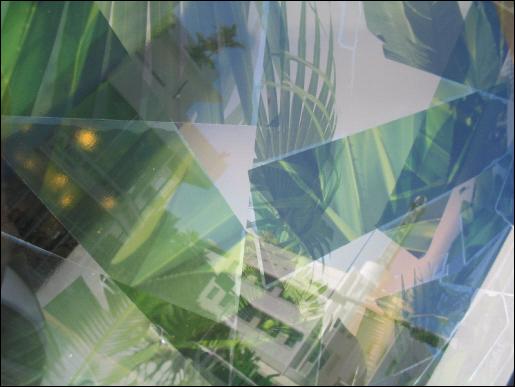 When the sun rose we explored more of the city, driving around South Beach, Little Havana and Little Haiti. It seemed everywhere we looked a photo shoot was going on—the kind of pictures you’d expect to see in Vice, but where were these hipsters hanging out when they weren’t on their photo shoots? We went out to Coral Gables and Coconut Beach—nothing much to see but the homes of wealthy people. Definitely a far cry from some of the other nearby neighborhoods. 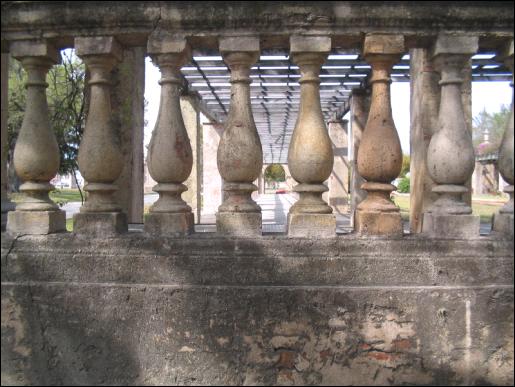 Eventually we found our way to Carlos’s house in West Miami. Carlos' wife Martha cooked up a fantastic meal of mostly vegetarian Cuban food—the tamales and empanadas in particular were amazing. Saw Carlos’s office where he works, with his inks, paints and stenciled fonts strewn about, and he showed us some works in progress. 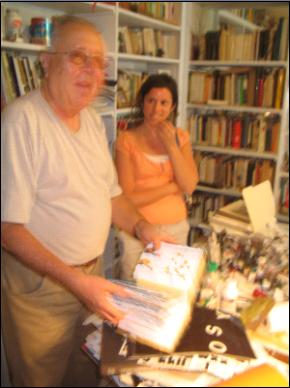 Carlos Luis showing us his latest 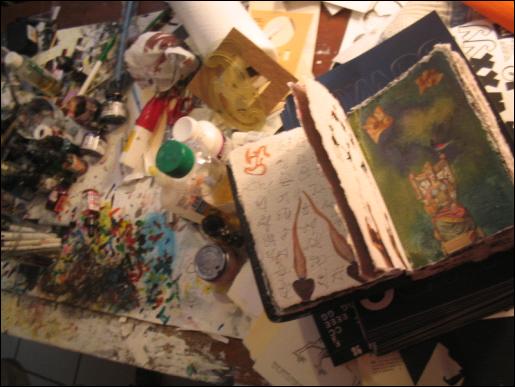 After that we ended up exploring Biscayne Island, then had Mexican food in that place near the Clay Hotel that was even worse than NY Mexican food (which I didn’t think was possible). Next morning we swam in the ocean some more and walked on the beach taking pictures of sand markings. Had a Cuban sandwich at Puerto Sagua, washed down with a Guanabana shake--probably the best meal we had in Miami (besides Martha’s spread of course, and David's II was good for breakfast, or at least cortadito's and guava croissants). Most of the other food in Miami we ate just to fill our stomachs. 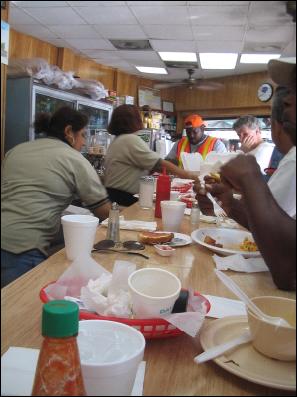 On the plane back we looked at the catalogs from the show and reflected on all the fine work we saw. We also had the catalog from the Harvard Infinity show that Chris Fritton brought—he finagled going to both, but we chose Miami over Boston (go figure). 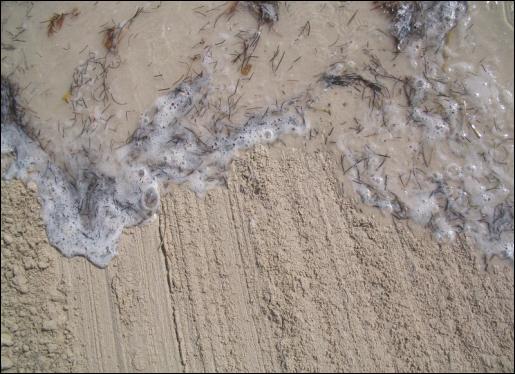 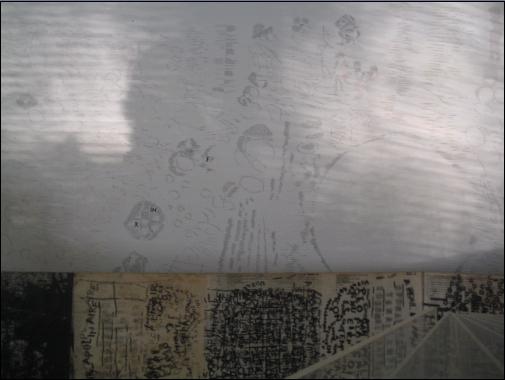 View inside the Sackner Archive

Images from the Harvard Infinity show (which opened the same weekend and I think is also running for a month or so) are viewable online at: http://www.fas.harvard.edu/~dudley/fellows/lit/Infinity/VP-main.htm.

So if you are in the Boston area this month, check out that show, or if you are in Miami the show at the Durban Segnini Gallery runs until April 5th: Go see what’s going on in the visual poetry world.